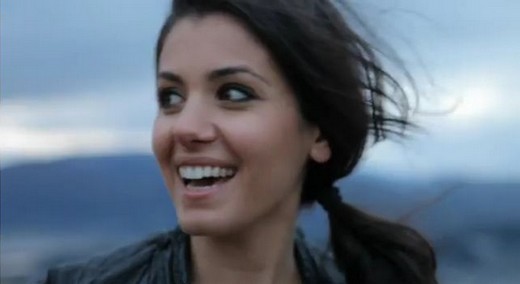 «A few weeks ago I was performing at the Døgnvill Festival in the arctic city of Tromsø in the north of Norway. Tromsø is surrounded by mountains and water and the scenery is stunning. Døgnvill festival is one of the most northerly in the world and the other artists performing included Pet Shop Boys, LMFAO and Norwegian artists including Jarle Bernhoft and Marit Larsen. We took the opportunity to shoot some footage for this video while we were there.

«We took the Fjellheisen Cable Car 420 metres above sea level to the top of Mount Storsteinen (The Big Rock Mountain). The cable car was smaller than I was expecting but the views were incredible. We were also lucky enough to see the Northern Lights which was pretty spectacular, although I had to go inside the cabin as it was so cold!»

«I’ve been going to Norway for quite a few years now for work and I love it. The nature is exquisite and there is something magical about the light. The sunsets are also so breathtaking almost every night.»